“I couldn’t talk, I couldn’t socialize with anyone,

and this program has allowed me to be where I am today”.

Joanne’s daughter Jenny was diagnosed with a brain tumour at the age of twenty and told she had an approximate two-year survival rate.

Although very upset, Jenny made the mental decision to live her best life.  She chose to begin 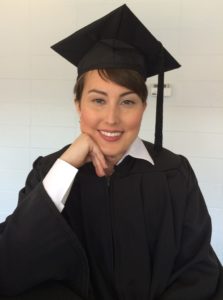 treatment and continue with her studies. Attending the University of Ottawa, University of Calgary, Law School in Sussex, England and later obtaining her Law Degree at Osgoode Hall in Toronto

“Her dream was to become a Criminal Lawyer,” shared Joanne.   Throughout her post-secondary education, Jenny also received various treatments, including surgeries, Chemo and Radiation.

Once Joanne was informed there wasn’t anything more the medical team could do for her daughter, she was advised to place Jenny in Hospice care.

“There was no way I was going to let her go to hospice; I wanted to keep her home with me,” shared Joanne. “That’s when we were told and connected with Acclaim Health.”

Jenny had nurses and personal support workers (PSWs) from Acclaim Health to help support her at home. The PSWs not only provided support to Jenny but assisted Joanne with instructions on how to properly care for Jenny in the best possible way.

“Our PSWs were there and supported me through all of it,” shared Joanne. “When things got worse with Jenny, they increased their support and helped wherever needed.  Often it would just be sitting there with me while she slept. They supported me mentally”.

Although you are aware of the outcome, you can never truly prepare for a loss of this magnitude.  You are truly left in such a dark place.  Unfortunately, in 2016 Jenny lost her battle with cancer.

“Acclaim Health didn’t stop there; they followed up and introduced me to a Bereavement Support Group.  One that related to Mothers who had lost adult children,” shared Joanne. “I attended the meetings, and although very difficult, it was the best thing I ever did. It literally helped me get off the ground, a place where I had struggled for so long.  It felt really good to be able to interact with others and know I was not alone “.

Joanne made some life-long connections in the support group, which helped normalize how she was feeling—finding comfort in those going through similar experiences.

“I learnt how to talk to people and to find a way to move through my grief. I wouldn’t have gotten through this journey if Acclaim Health wasn’t involved,” shared Joanne. 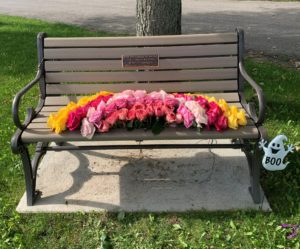 Pictured here: The bench that Joanne decorates at the cemetery in honour of Jenny.

Joanne now works part-time at a flower shop and uses all the beautiful flowers to decorate a bench at the cemetery in honour of Jenny. She drives on Fridays for the Cancer Society and also volunteers with Acclaim Health. Helping facilitate bereavement support groups and providing one-on-one support to bereaved parents.

“The reason I’m doing this is because I was where they are,” shared Joanne. “I couldn’t talk, I couldn’t socialize with anyone, and this program has allowed me to be where I am today.”

Joanne currently supports one couple that lost a child, visiting them once a month and remaining connected through the phone. She also supports another mother with a very similar situation to her own.

“Bereavement Support like Acclaim Health has to remain intact,” shared Joanne. “We are losing too many loved ones; with the pandemic and the mental health crisis.  Programs like this help keep people afloat. Everyone needs to know that this is out there.”

Acclaim Health offers a variety of bereavement support to help and support people like Joanne in their journey with grief.

Translate
Back to Top