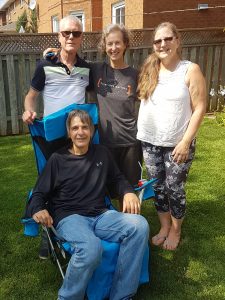 “You gotta stay positive, you gotta learn to fight it.”

Nick has lead a very unusual life, most of it being incarcerated. Following recent a diagnosis of terminal cancer, Nick was eligible for Compassionate Release, and rejoined society with only the support of his family. With some help from the Hospice Visiting program, Nick has found happiness and spiritual support, drastically improving his quality of life.

Nick has three volunteers through this program that visit with him at various times throughout the week for around an hour or two. These volunteers have been visiting with Nick for a while, providing companionship and emotional support.

For his birthday this past summer, Nick’s volunteers got together to arrange a surprise party for him, and upon returning home one day, found all three of his volunteers, his program coordinator, and his family in the backyard jumping out and yelling surprise.

“They all popped up, it was so incredible. It was very spontaneous, it was very enjoyable. We had good conversation, we had good tea. You can’t put a price on that it’s just invaluable to have that kind of interaction and that kind of communication between people.” – Nick Jansic

Alongside the social aspect of the program, spiritual support is something Nick values. One of his volunteers come once a week to do reiki with Nick. He says this helps him drive out the negative energy that’s festering in him, allowing him to start healing and maintain a positive outlook on life.

After living a challenged life, Nick has found happiness, and with help from our volunteers, can live out his life with a smile on his face. “The volunteers, they’re second to none. They help and I really appreciate them when they come. We have good communication and we just got along great right off the hop. I think it’s hard to find that sometimes but it’s there and I’m eternally thankful for it.”